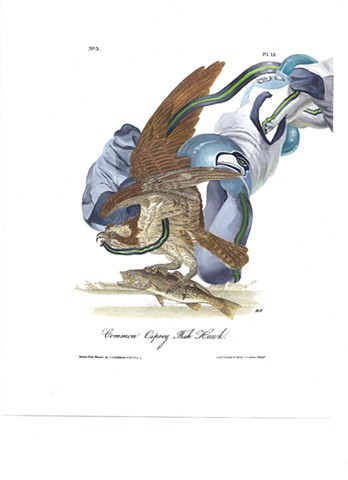 John James Audubon set out to identify all the birds of North America. He shot, posed, and documented hundreds of specimens in paintings that he then produced as what is widely considered to be the finest ornithological work ever produced, The Birds of America. He sold subscriptions to these prints in advance to fund the production, and worked tirelessly to make it happen. His entrepreneurial spirit and drive to conquer nature in order to understand it make him a quintessentially American character. It is through his lens that I re-focus on today’s wild creatures – the team mascot. Ancient people believed that they could embody the power and spirit of animals to gain strength. This was an ideology passed down through generations by storytelling and sacred rituals. Sports teams participate in similar ways and individual athletes preform personal rituals in the form of superstitions. Teams also sometimes use the an animal talisman for which fans display their allegiance. The slow and pastoral game of baseball generally employs a pretty and passive creature like a cub or a cardinal. Whereas Football’s animals are aggressive and predatory like an eagle, jaguar, or bear. In these paintings I am taking the Audubon animals and conflating them with abstracted elements of the uniform bearing its name to subtly take a step back and look into the root of the name.